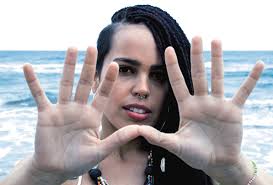 Eliane Correa is a Latina pianist, MD and composer based between London and Havana; trained classically at the Luxembourg Conservatoire, she went on to study piano and composition at the renowned Instituto Superior de Arte in Havana, Cuba, in 2005, then relocating to London in 2007 to study a BA & MA Ethnomusicology at SOAS (part of University College, London).

During her early years in London she became known for her work as a bandleader, composer and pianist in her Cuban fusion project, Wara, which went on to tour both in the UK and internationally, release several records and win three LUKAS Awards (Best Latin Alternative Band 2012, 2014 & 2018). Since 2012, she leads two other projects, Eli & La Evolución, a contemporary and original Cuban Timba project, and Afro-Cuban jazz/soul ensemble En El Aire Project, with which she released the highly innovative, critically acclaimed album Rumba Con Flores in 2016 (Movimientos Records).

She is the session pianist of The World Of Hans Zimmer, a large-scale production of the composer’s works for a symphonic orchestra format which has two forth coming sold-out European arena / stadium tours (November 2018 & Spring 2019). Her current work also includes curating the London Latin Jazz Festival every year, and she is also the musical director and pianist of established and internationally acclaimed West African-inspired interactive show Do You Speak Djembé (aka “DJEMBE! – The Show” in upcoming United States-based version).

She recently composed and directed the soundtrack for critically acclaimed Argentinian feature documentary Sombras de Luz, which will be having its international premiere in November 2018 in Rome, and has taken part in the composition and recording of a range of works for the screen, in Cuba, Argentina and Spain.

Her past musical theatre collaborations (composition, lyrics, arrangements, script) have been performed in Luxembourg, New York and Buenos Aires.

Eliane’s unique sound equally reflects her Latin heritage and London musical melting pot experience; in both her compositions and playing, there is a lot of attention paid to the African roots of the musics that she identifies with, but her classical musical upbringing remains weaved into her , to create an intricate, sophisticated and unique sound.