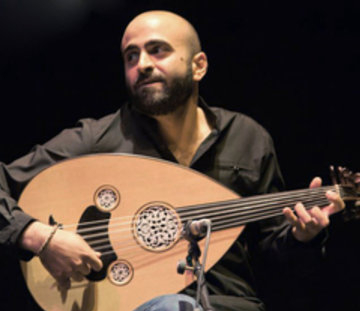 Saied Silbak is a Palestinian composer and Oud player born in Shafaa`mr, a city located in the lower Galilee of occupied Palestine. His music has been performed
around the world at festivals and concert series in Palestine, the UK, Belgium, France, Morocco, Argentina and beyond. Silbak has a Masters Degree in music from the Guildhall School of Music and Drama in London. He composes music for solo Oud as well as traditional Arabic and various contemporary ensembles. In recent years he has worked with many artists on interdisciplinary projects and has been involved in educational and community works, developing a politically and socially engaged practice. His music is known to bring together new musical colours by fusing elements from different musical styles combined with rhythms from distinct regions of the world, providing the listener an authentic world-crossing experience. He won ‘best artist’ at the Palest’In&Out festival in 2016.